As probably most of the 7 billion people around the world knows, Olympic 2012 is in London.

I’ve been watching the events on and off after work, specially due to the fact that we have a 2 weeks break from the dojo during the olympic period.

While admiring the athletes doing their stuff, my eyes kept drifting off to this little creature usually bouncing up and down at the corner of the screen. As a friend of mine has mentioned:

Way back when the Olympic mascots were first presented, I, like pretty much 99.99% of the Brits, thought “what the hell!??!”. Gradually, I must admit I’ve grown rather fond of the 2 alien looking creatures.

Bolt stormed through and won the 100m sprint with a new Oly record of 9.64 secs….

And they all did this….

After I’ve pieced my head back together due to it exploding from cute-overload, next thing I know this was delivered to my office and I had to drag it back home (and was quite impressed that barely any Londoners batted an eye at the sight, pun not intended). 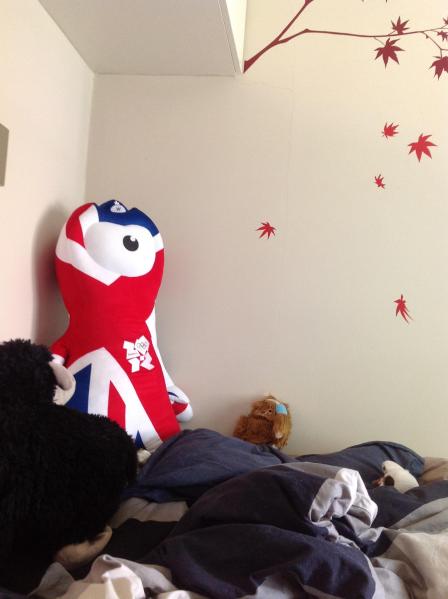 My hand might have accidentally slipped on the “BUY” button on amazon.

I’ve been buying all sorts of figurines lately… and Mitchie’s been feeling rather left out. So she got a few mitchie sized ones. (Human sized keychain)

Just plopped Mitchie back into her room, and she stood there looking like this….. She can be such a diva sometimes!!

Time to catch up on some lovely animations!